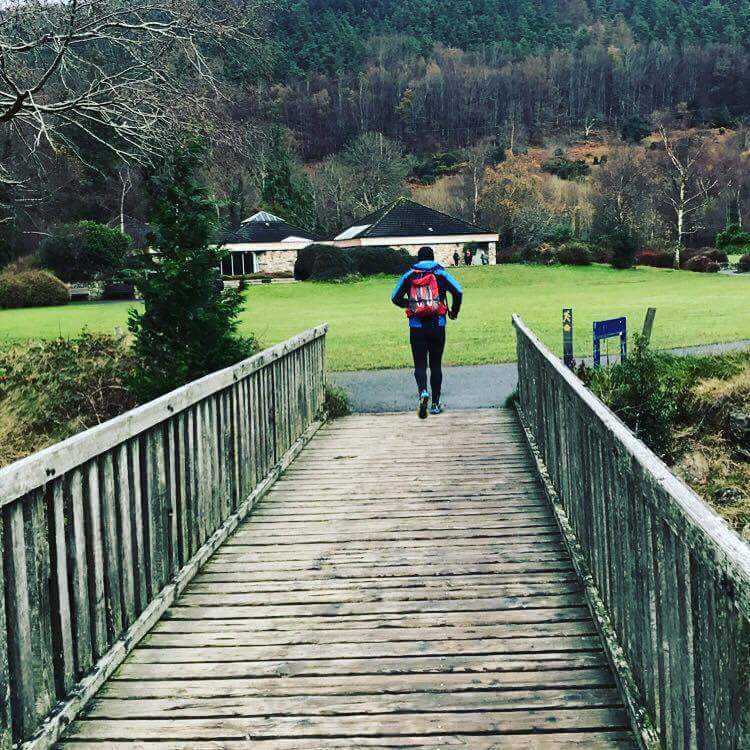 Our last planned challenge was scheduled to be a longer-than-marathon race, an "ultra". Originally it was planned to be 100 miles as I've done 2x50 mile races already and wanted to move up. That also carried the potential for qualification for some high profile ultras, not to mention that the bigger the race, hopefully the bigger the benefit to Pieta House, so there was a lot going into the last challenge.

With all that in mind and the fact that the marathon and Elbrus were so recent, increasing the potential for injury, we decided that a third 50 mile race was a more sensible goal, or at least as sensible as running an ultra gets. Unfortunately the decision came too late to save me from a back injury with a less than week to go. Commitment matters though, so I put all I could into getting it ready and we got up at 2.00 a.m. and headed to the race anyway.

For the first 35k or so the decision seemed to have been vindicated, the running came easy and the delight of meeting Edel at each aid station lifted me. The ham sandwiches and Pepsi didn't hurt either. I got over the biggest climb of the day with a minimum of fuss, skipped down the other side with no pain, crossed a valley and up the other side where I felt so good that I barely broke stride at the next station. It sometimes happens in races that a niggle you carry in disappears as everything fires up and that seemed to have happened this time. In the next station, Edel "interviewed" me on camera. I moaned a bit about my back and feet, but really I was feeling happy and confident, we were enjoying meeting up and I had my favourite sections coming, so neither of us paid too much attention to the grumbles. As I left the station though, they issued a reminder and pulling away into a run was suddenly painful. I shared the next mile with another runner and it helped, but when he quickened I couldn't go with him and it was suddenly looking bad. I had no power up the hills and where I'd normally make up time on the flat and downhill, as many ultra-runners do, I had nothing there either. I limped through the next few kilometres at a speed I calculated would leave me outside the cut-off time even if I could sustain it (which seemed unlikely), got no relief from a very runnable downhill and started turning over the unfortunate possibility of my second ever DNF in almost 40 years of running. The decision was cemented when another runner appeared from the mist behind me and said, with surprise, "Didn't think I'd see you again!”.

I limped into the next station and thankfully Edel was there. She had food and a warm van waiting, like I needed more temptation. The next section was open mountain, it was raining, starting to get dark and I was already cold, so it would have been foolish to expose myself to that as slowly as I was moving and it was a no-brainer to pull up. I made the retirement call to race HQ, returned the tracker, and went home.

Obviously we’ve looked back on what went wrong on the day, our best guess is that the last three events were in the wrong order and too close together for the best training, particularly after a full year of events. Normally reflecting on that would be replaying the disappointment, self-recrimination about training and performance, resolving to do better or swearing off races altogether depending on mood, but to be honest, not this time. These events were by us, but not for us, they were for something bigger and we achieved our aims there, so we can accept the decision to stop the race was the right one knowing the more important job was done. It also meant I was in shape the following day to take my nephews to see Paddington in the cinema and there’s no race will ever beat that.

Thank you again so, so much to everyone who followed on the tracker, shared our posts, donated, sent messages of support and just generally joined in on the day, you really are brilliant.