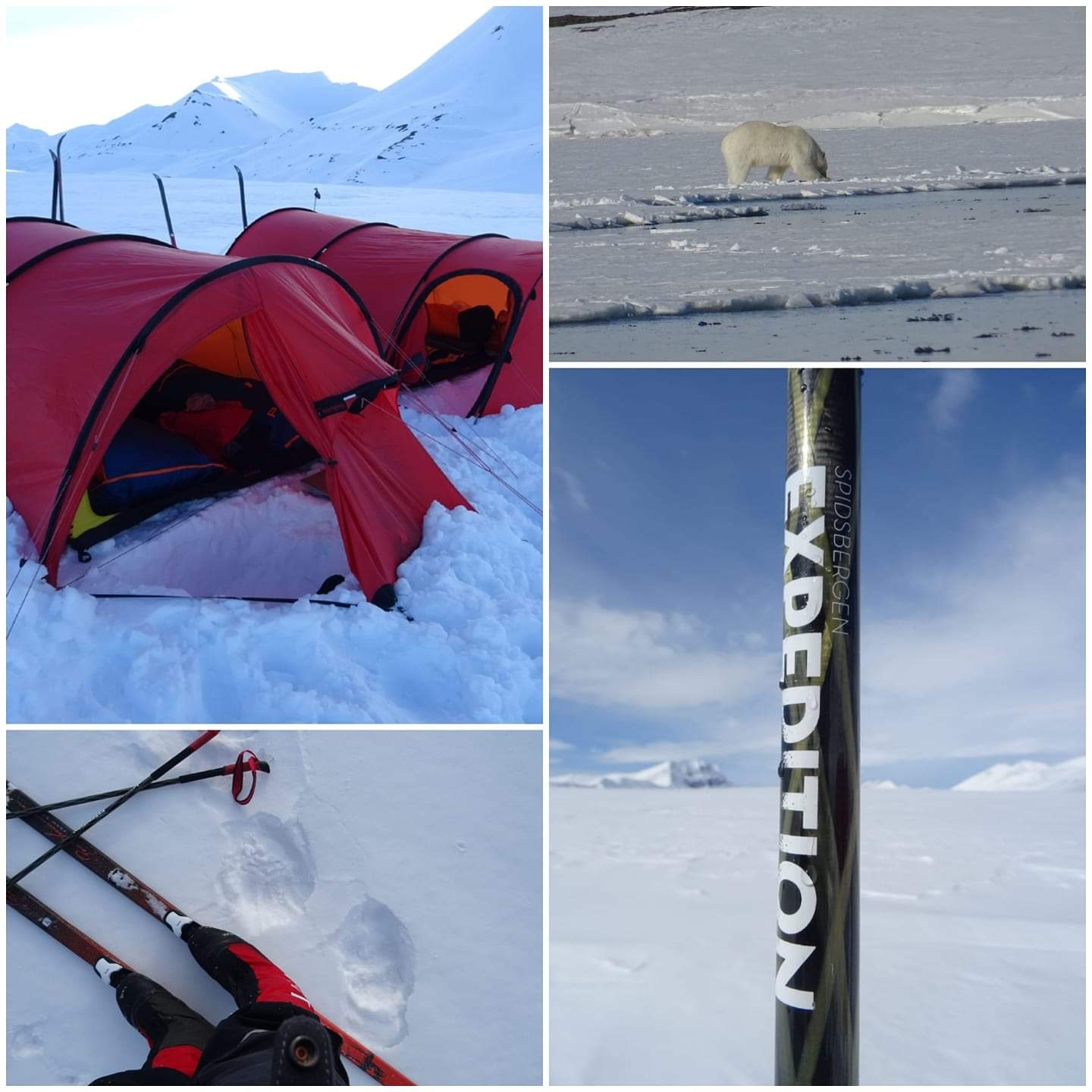 Ah, Svalbard. The name is evocative, conjuring an edge of the world feel and full of polar history. Naturally, it made total sense to make it the next phase of our journey to the extremes of the world so I signed up for a "summer" ski trip. The reputed northernmost city in the world and staging post for many expeditions to the North Pole makes an impression when you land, it's surrounded by snowy mountains and sitting by a partly-frozen fjord, then when you leave the terminal building the signs for the north pole and polar bears aren't just for show, they really mean something. On the way up to the guesthouse some reindeer stopped the traffic and an arctic fox ran across the road, clearly the edge of the world is a busy place.

After a bit of pulk packing and meeting with Helen, our expedition manager from Newland, and Marit, our guide, it was off to the jetty to meet the beautiful Pia, a Greelandic dog that travelled with us to help guard against polar bears and demand belly rubs, then into an immersion suit for the next transport. That sounds all nice and simple, but the next leg actually went like this; a boat across a choppy arctic fjord, blockaded from getting off the boat by a polar bear that came within about 400m of us, 45 minutes shuttling around between two boats to pick up a party of six cut off by the bear and a party of two who were camping where the bear was headed, a spin to the next bay for an alternative landing site only to find walrus on the ice forcing us further along, off the boat onto the ice to find the remains of the bear's recent meal complete with fresh blood on the snow, a quick dash out of the coastal zone up onto the glacier and away from the bear, the walrus and the seal bones. And that was all just to get to the skiing... It was well worth the effort though, the Trollheim area is beautiful and we skied up the Nasenbreen (Nansen Glacier) and through the Nansenpasset ( Nansen Pass) to pay passing tribute to a polar hero to get to it. On the way up the glacier we had to mount a polar bear watch as we were still in sight of the coast. Two hours of standing in the arctic cold staring at many shades of white to watch for something else white was a great time to stop and think about it all after the mad dash, an opportunity to take in the scale, solitude and silence of the place. We took two days to ski up the glacier in a whiteout. I navigated (with lots of support from Marit!) and we found were we wanted to go, so I'm claiming a win there, in spite of a few small diversions. We camped on the far side of the pass in a huge glacial plateau with nunataks all round, including one that did a brilliant impression of the Matterhorn from the right angle. It's lucky the view was so good, because we were then stuck there for two days. At about 6 the following morning Marit woke us to look for help. During the night, a ferocious gale had sprung up and threatened to blow us off the glacier. She'd been shovelling snow and building walls for over 5 hours, but the rising wind needed more hands so we shifted tonnes of snow, built metres of walls and dug knee deep trenches to protect the dog and the camp and divert the drifts that eventually came halfway up the tent walls. Reviews of our pictures by locals guides say it was the best camp they'd ever seen, which was just as well, because the wind hardly let up until 1.00 o'clock on the morning of the third day. By that stage we were too late for the scheduled pickup and had to delay the boat until 8 hours later, then ski 20km in one bite to catch it. Hard skiing and good guiding paid off and we made it. I've never been so happy to see a speck of boat arriving into a bay as we picked our way down the glacier with our heads on swivels looking for bears. It was a cold, choppy 90 minute boat ride back to Longyearbyen, but typical of these things, the relief soon turned to wanting to go back for more of an an amazing place. That's grand, it'll be there again and so will we on one of the next legs of our polar journey, maybe as a jumping off point to go even further north....

We have more pictures on our Facebook page too and yes, the bear really was that close!