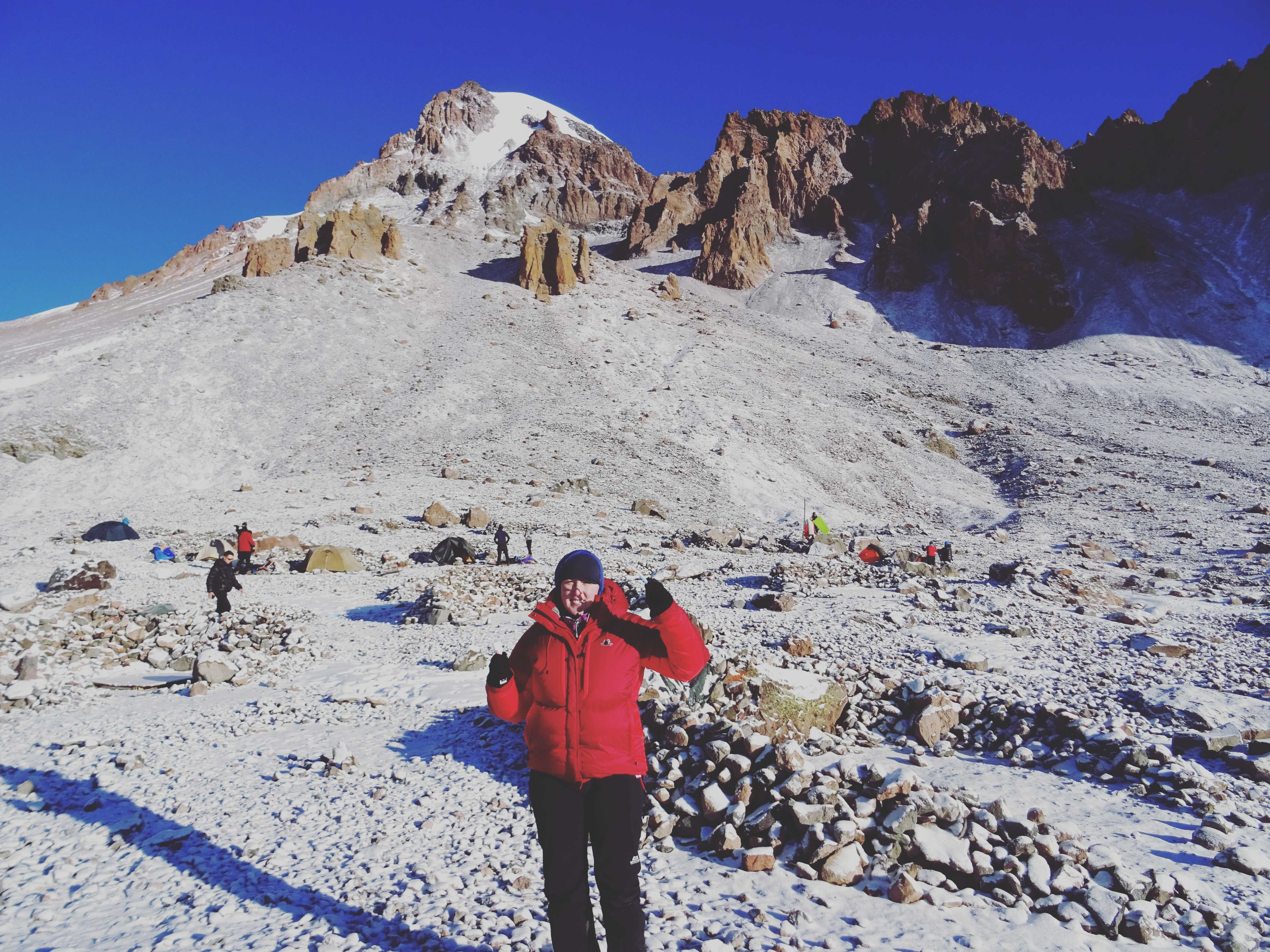 Our lastest challenge  took us to Georgia to climb Kazbek, a 5000m mountain, as a lovely mountain in its own right, but also as an acclimatisation peak for Elbrus, Europe's highest mountain at 5652m, just over the border in Russia. Kazbek defeated us as conditions robbed us of sleep at a vital time, meaning that an attempt to summit would have been foolish to the point of danger, a line we won't allow ourselves to cross. But even as it turned us back, Kazbek generously allowed us to go to 4000m twice, vital acclimatisation for the bigger goal of Elbrus the week after. We also learned a lot from the mountain and we were glad to have such a quick opportunity to put those lessons into practise.

The set up on Elbrus is very different to Kazbek, in fact to most mountains for that matter. Accommodation is in huts made from converted shipping containers and what appear to be large barrels the size of road tankers. Despite what most people told us what they thought of it before we went, we found the area had its own charm. Everyone was really nice and helpful, the huts were warm and clean and our cook kept us well fed and hydrated. Besides, you'd be disappointed if the mountain didn't recall a certain era in Russian history.

Our summit day was literally our last chance to get up the mountain as the weather had been too unstable the previous nights. Good weather, it turned out, was clear and calm at minus 30. That's not a typo. It was colder than either of us have ever felt and we climbed in every layer and kept moving. Despite that, or faces froze and we lost the feeling in our hands from time to time. Our motivation didn't waver though, we kept going and sooner then we expected, we were on the highest point of Europe. Despite our jubilation, it was too cold to hang about, an estimated minus 40 to 50 with windchill. We got down as quickly as was safe and celebrated in the valley, with a beer called 5642 of course.

We owe a huge debt of gratitude to people who helped us, including Philip DeBerger, Natalie and Zaur, guesthouse cooks, drivers, horsemen and mountain rescue in Stepansminda, the driver who got us safely through the 5.5 hour drive to Elbrus and stopped to show us beautiful 1940s Russian Army trucks, Alex, Annette and Denis on Elbrus, mountain rescue in Terskol who registered us in an out with a stern but grinning avuncularity and whose only English was the ability to shout "Good luck!", the driver who took us to Nalchik and drove a full lap of the city looking for an obscure, tree-hidden hotel and the people of Nalchik who couldn't hide their surprise at finding two English speaking mountaineers in their very non-tourist city but refused to be deterred from helpfulness just because we couldn't talk to each other and the astronomer in the city centre park who showed us the moon in stunning detail and his photos of distant galaxies. Absolutely lovely, the lot of them.

Thanks again to everyone who has supported us and we really hope you stay with us for the next challenges.